The Brief called for a modern farmhouse to become the central residence and family estate for an extended family involved in the breeding of rare game. The site situated within the Rust-de-Winter conservation area, is an exemplary section of the South African Bushveld landscape, fronting onto the banks of the Elands River. Initially the intention was to site the house on a plateau alongside the bank of the river, though after much deliberation & investigation, it was decided to build the house above the 100-year flood line, which afforded a panoramic vista over the surrounding context of the farm.

Calling for various living spaces, each with its own character, & 4 large en-suite bedrooms for the extended family (which include 4 married couples, and a number of grandchildren). The building had to communicate the quality, order and professionalism of the “business”, centered around the breeding of rare game. Future extensions to the house would be based on this, as a point of departure.

Reinterpreting the traditional thatch lodge became the central concept of this project. Although not a specific requirement, the 45-degree pitch became a strong design informant. Further inspiration was drawn from the structure of said thatch lodges, in the implementation of identical structural elements. In the same way one would use equally-sized timber poles, it was decided to use steel H-Profile elements. The entire pre-fabricated steel structure is made up of 152x152x23 steel H-Profile columns & beams. This led to a purist form and “systematic” detailing. Though Pre-fabrication and “systematic” construction is not necessarily commonly employed in South Africa, it’s becoming more important with increased demand and rising labour costs. The exploration of this form of construction logic could be considered most appropriate for the context of this project due to the site’s distance from reliable material suppliers.

Initially the prefabricated, site assembled steel structure was erected, allowing the permanent shuttered concrete flooring, or suspended timber floors to be filled-in where required. A concrete service tower was introduced as structural core. This core also serves as main heating and cooling element. The core consists of two shafts; one as evaporative cooling tower, the other as chimney for a fire place. The fire place is also the fundamental element of the large central living area. Insulated timber walls fill the portal frame, clad on the exterior with either thermo-treated timber or Corrugated Zinc-Alume Sheeting. This in-fill approach was also dotted with brickwork panels where required.

Careful attention to flashings and connections give the building additional formal articulation. Enormous attention was given to expressing the archetypal house form.

While the House van der Westhuizen takes on a familiar shape of the traditional, pitched roof house, this design attempts to rethink the spaces such a form creates, while also making the construction of said spaces legible to those who interact with the building on a daily basis. 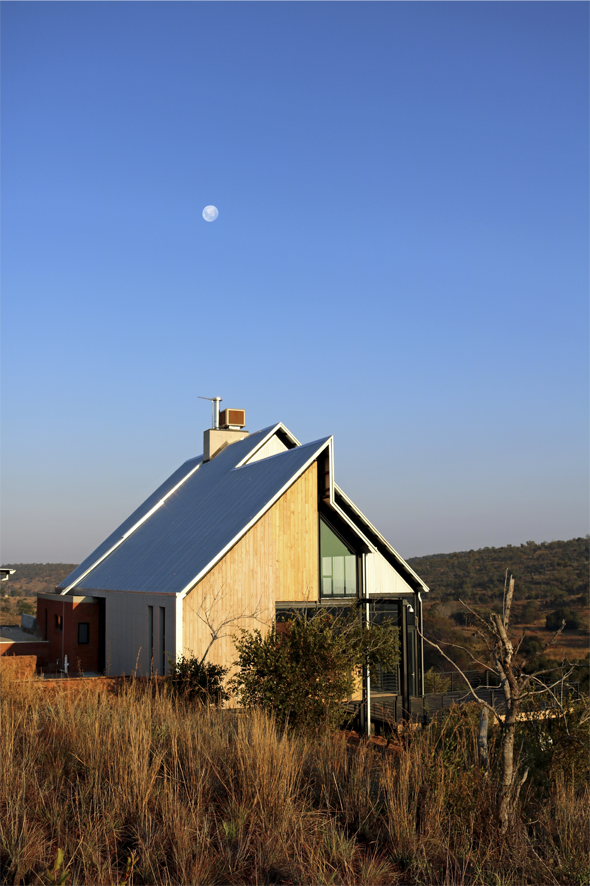 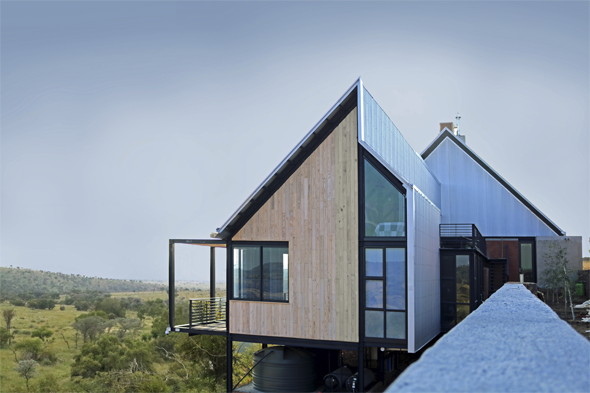 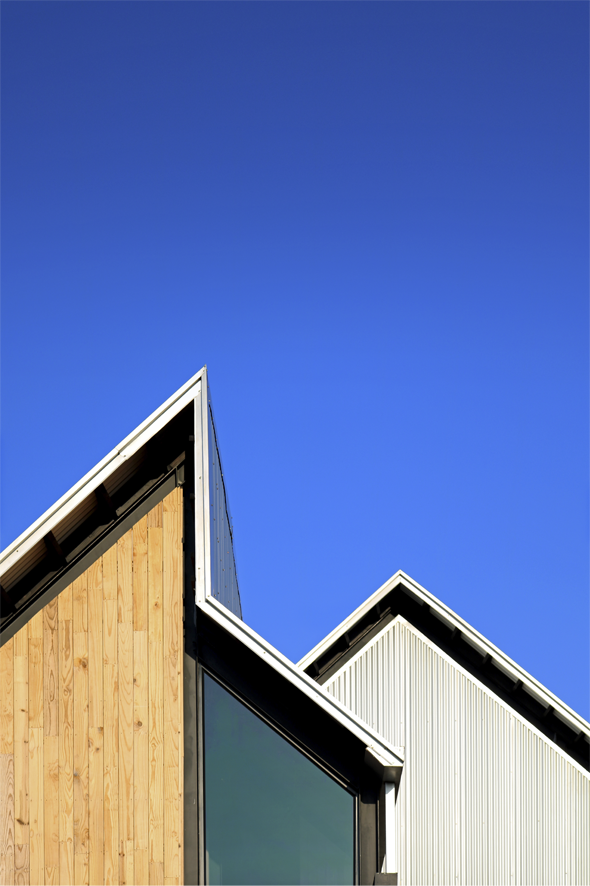 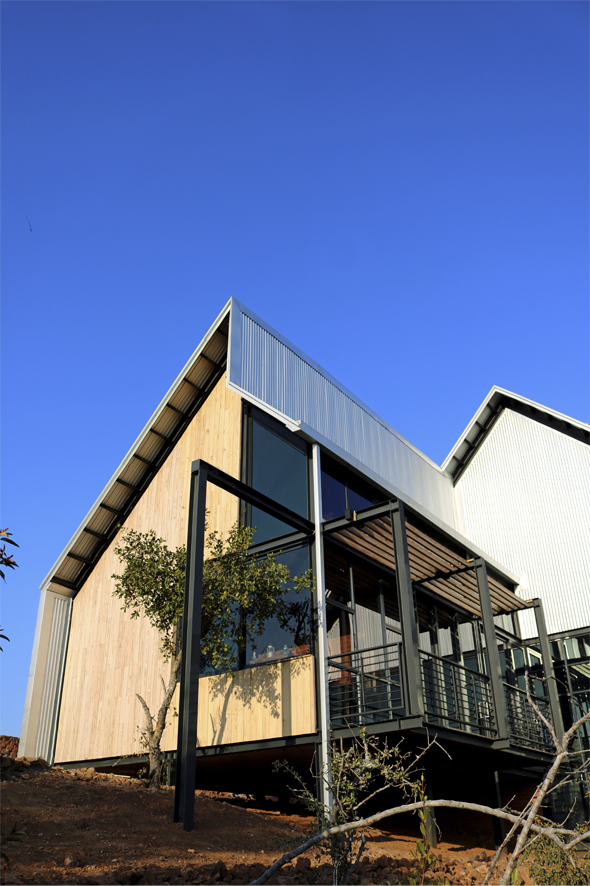 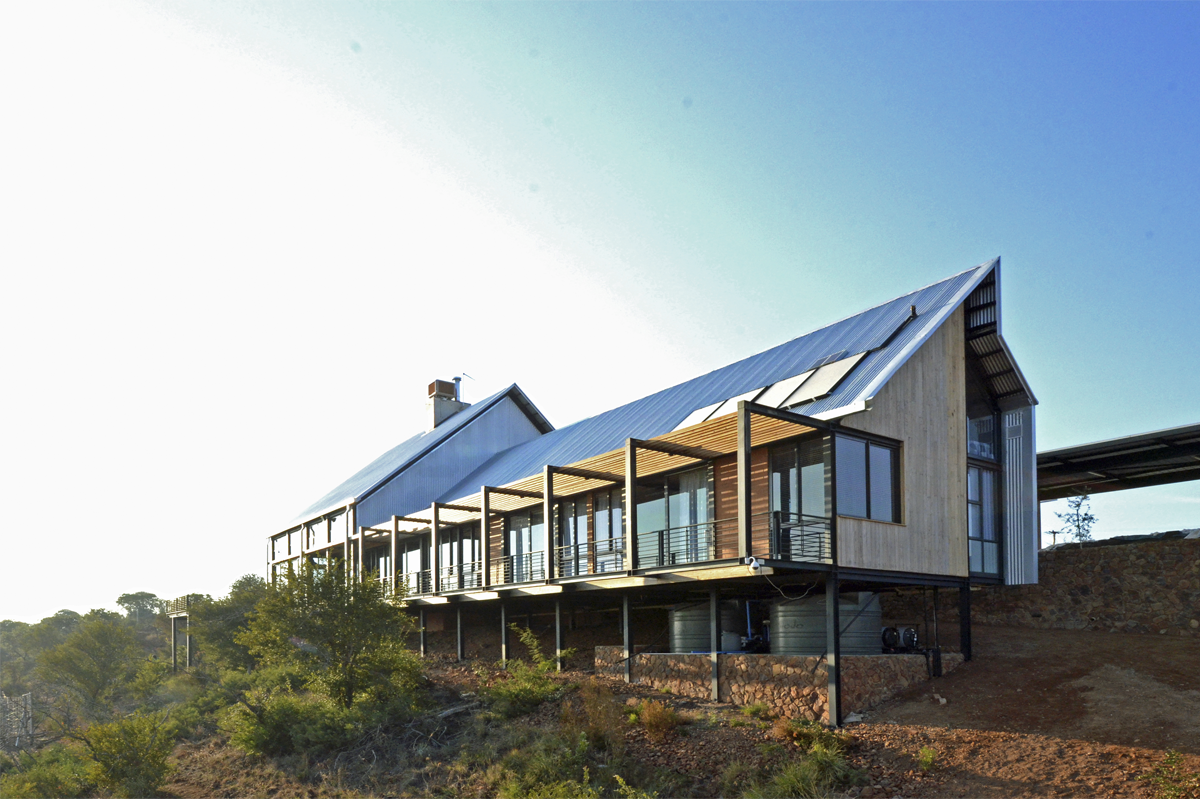 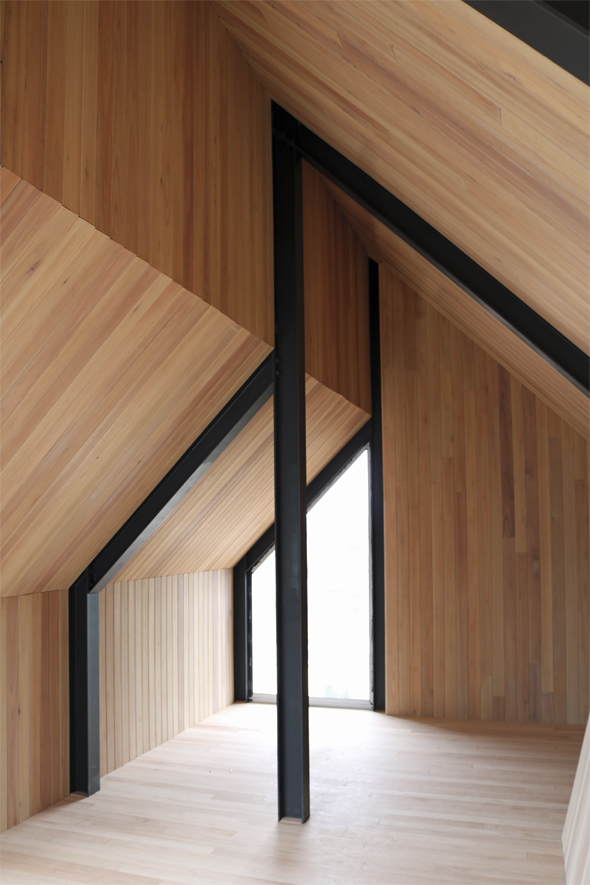 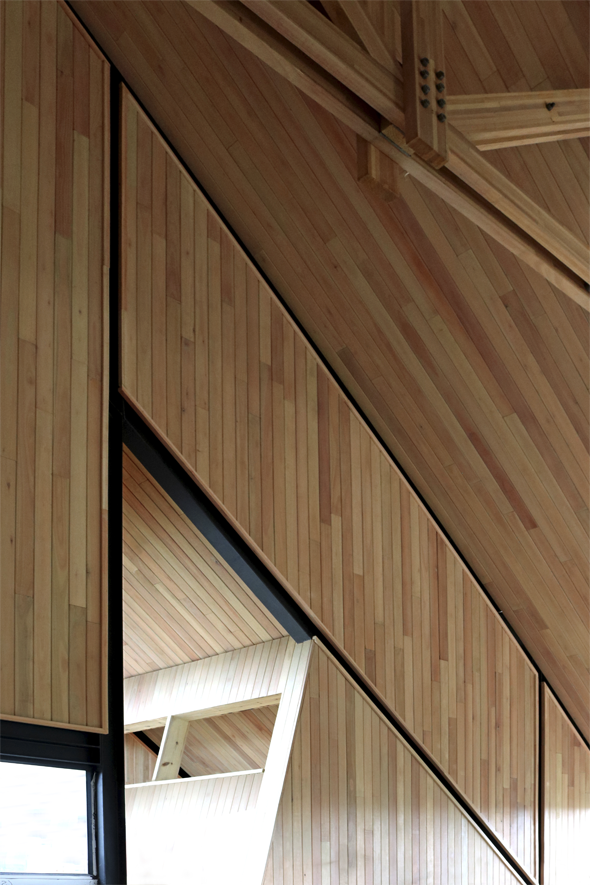 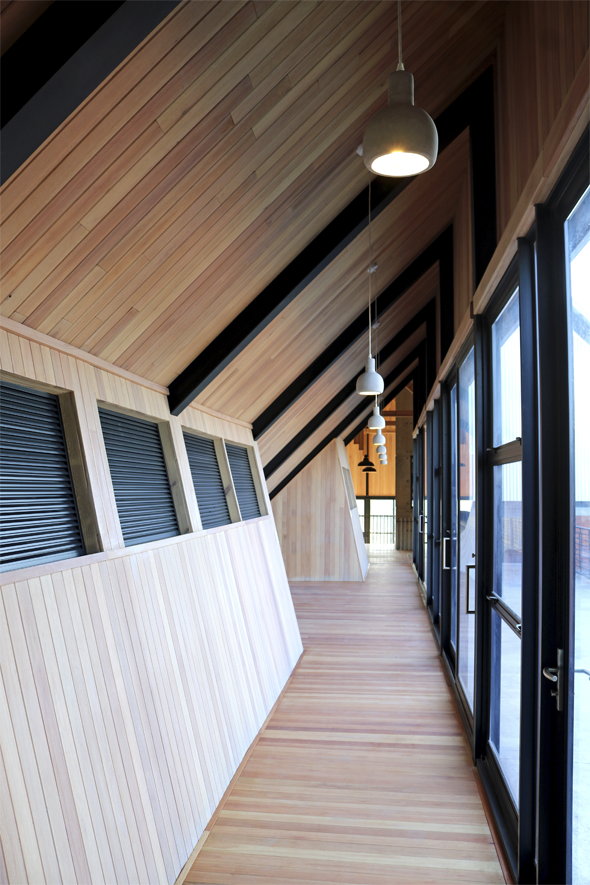 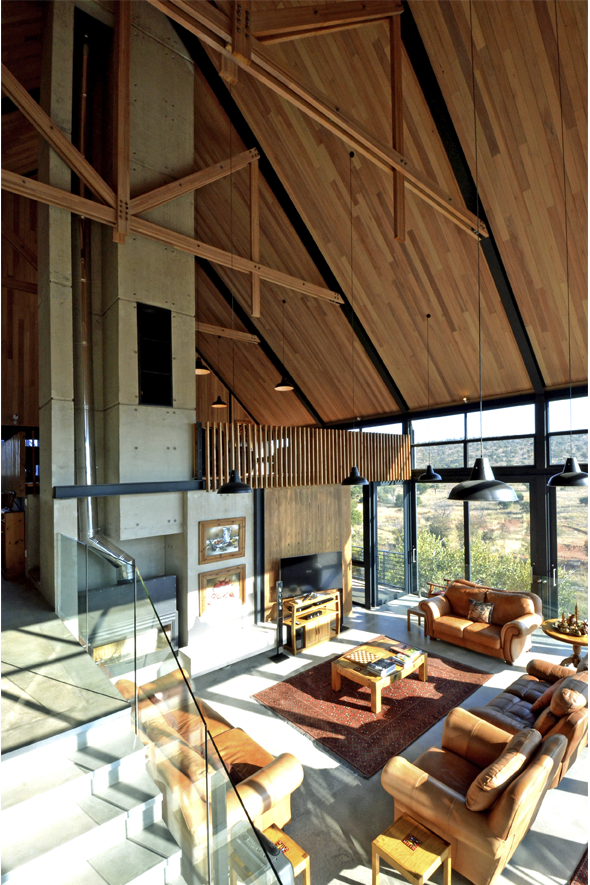 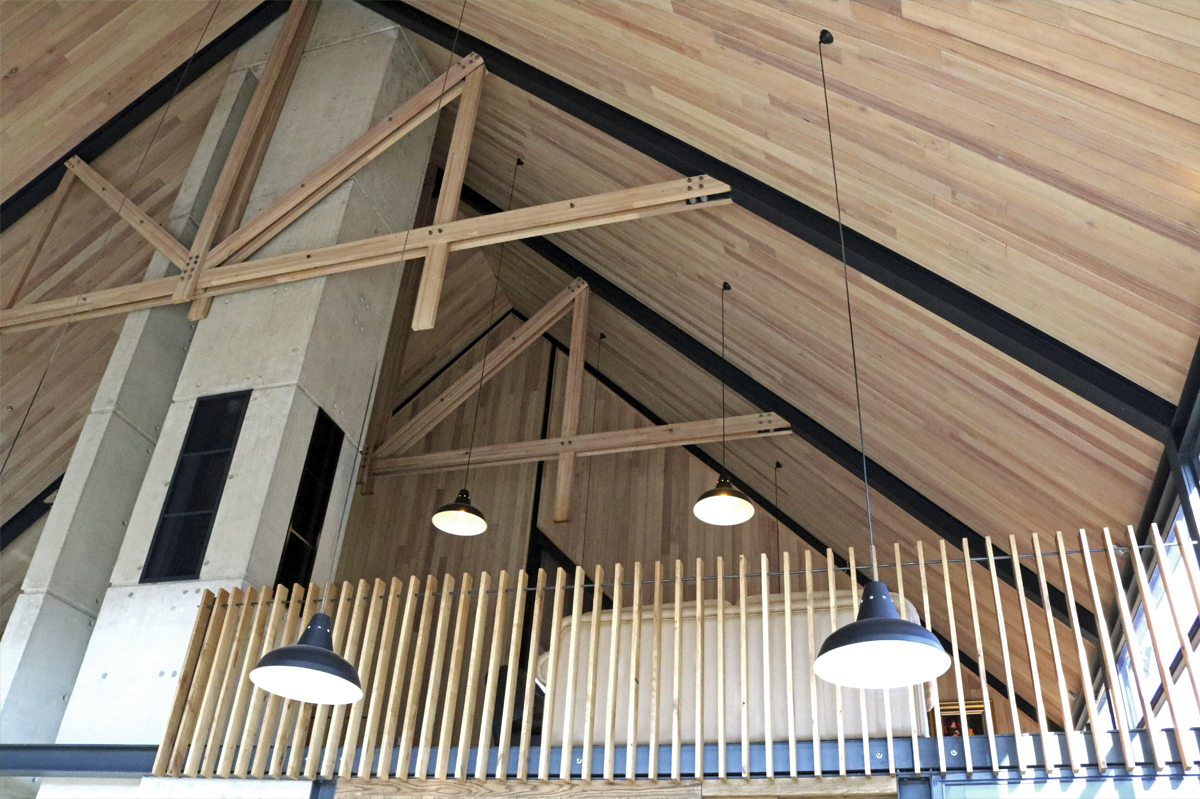