The brief was to create a flagship building based on ecological sustainable principles which would showcase their philosophy toward the natural environment. Thus, the design response was a building that would be sustainable on all three levels; ecological, socially and economical. Understanding that these three pillars of sustainability influences one another, the objective was to find a balance.

Passive systems like orientation, shading, natural ventilation and lighting were carefully considered to create a good static basis. These systems would ensure a broader comfort zone for users. The building was orientated directly north and a courtyard was created on the southern side of the building. The northern overhang allows for winter heat gain and summer shading, while the southern façade allows for ample natural light.

Dynamic systems were built around the passive basis to further broaden the comfort zone of users on exceptional days. A grid tied photo-voltaic system was designed to deal with the day to day energy demand of the building and also to absorb the mechanical ventilation energy demand used occasionally. Rainwater from the roofs is collected and stored in a large underground water tank buried in the courtyard. Municipal water is also stored in the tank from where it is taken to a small water filter station located in the warehouse.

The building was also designed to keep maintenance to a minimum, materials were kept as natural as possible for this reason. A monolithic face brick wall creates a bold street façade which is broken up with a punched steel window frame and also by special bricks that create an integrated woven fabric to specific areas. A horizontal concrete box frames the glazing on the northern façade which acts as a light shelf, also protruding to inward to act as desk shelving. A timber pole and thermo-treated pergola structure floats above the southern courtyard which consists of grass blocks, planted areas, timber decks and a linear koi pond. Fever trees are planted in the courtyard and will in time grow through the pergola structure. A spiral staircase extends from here to the roof garden which gives an aerial overview of the pergola and courtyard.

The intention with I-CAT’s new office interior was to not conform to the conventional approach of interior design but to assure that the spaces resonate with the same principals of the envelope. Questioning the predictable use of partitioning was the main objective. Instead of regular drywalls, plywood partitioning has been designed.

All the furniture and finishes have been well-considered and evaluated according to a sustainability rating. Materials were kept as natural as possible, without any superficial finishing and coverings which, together with the ample natural lighting, results in an interior that is beautifully light, simple and honest. 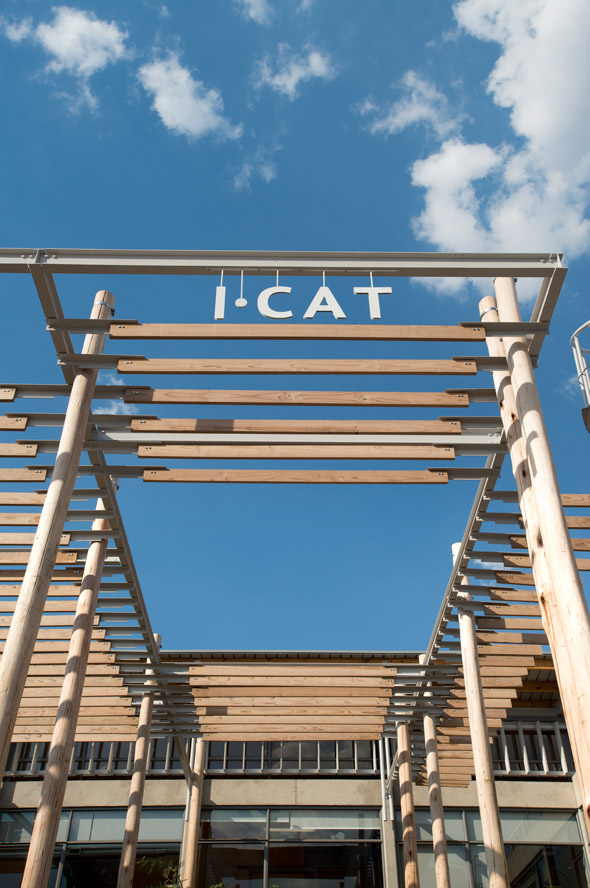 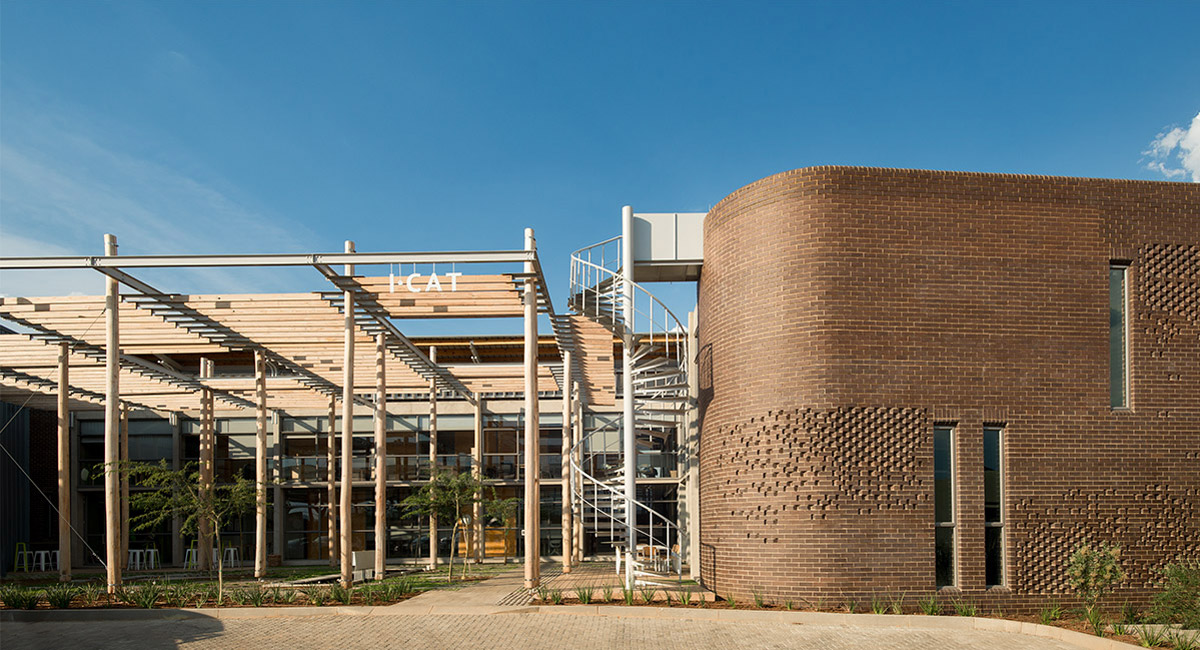 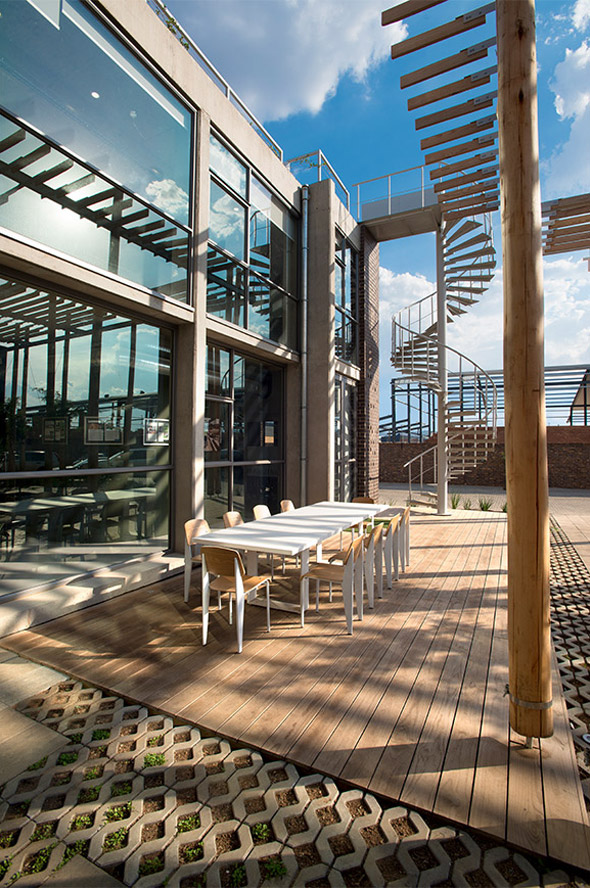 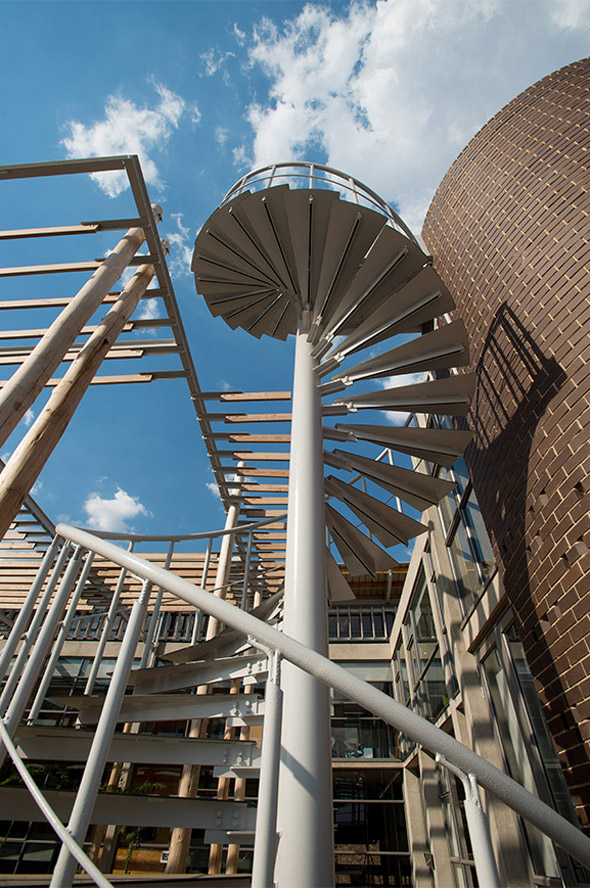 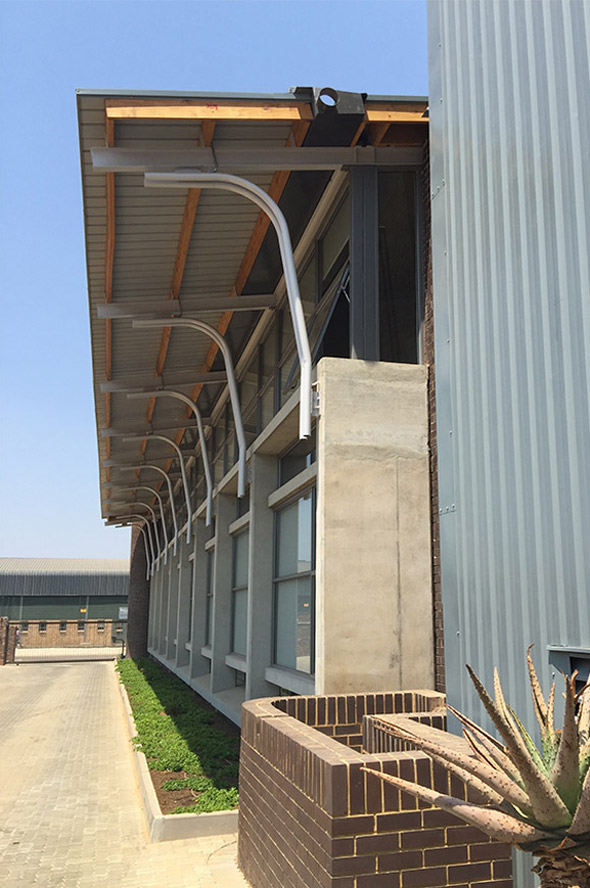 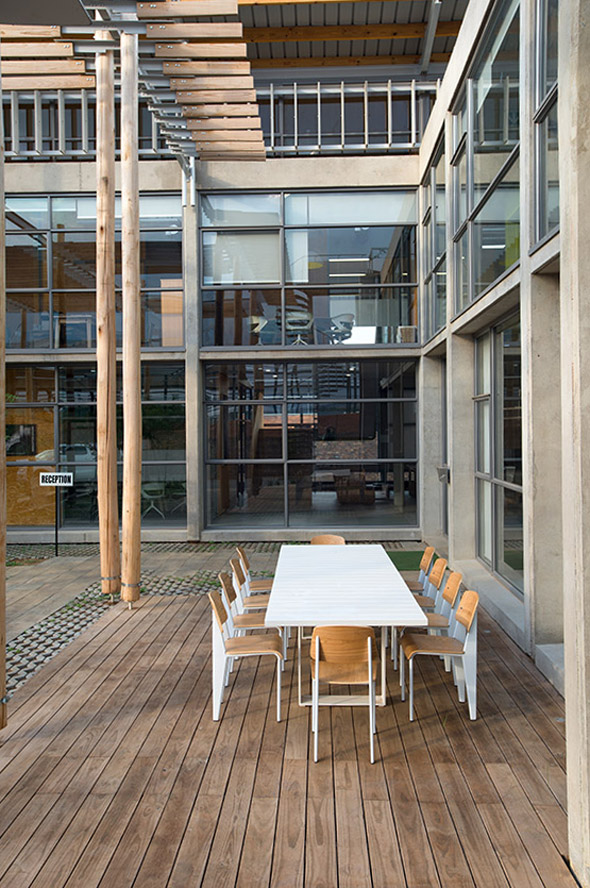 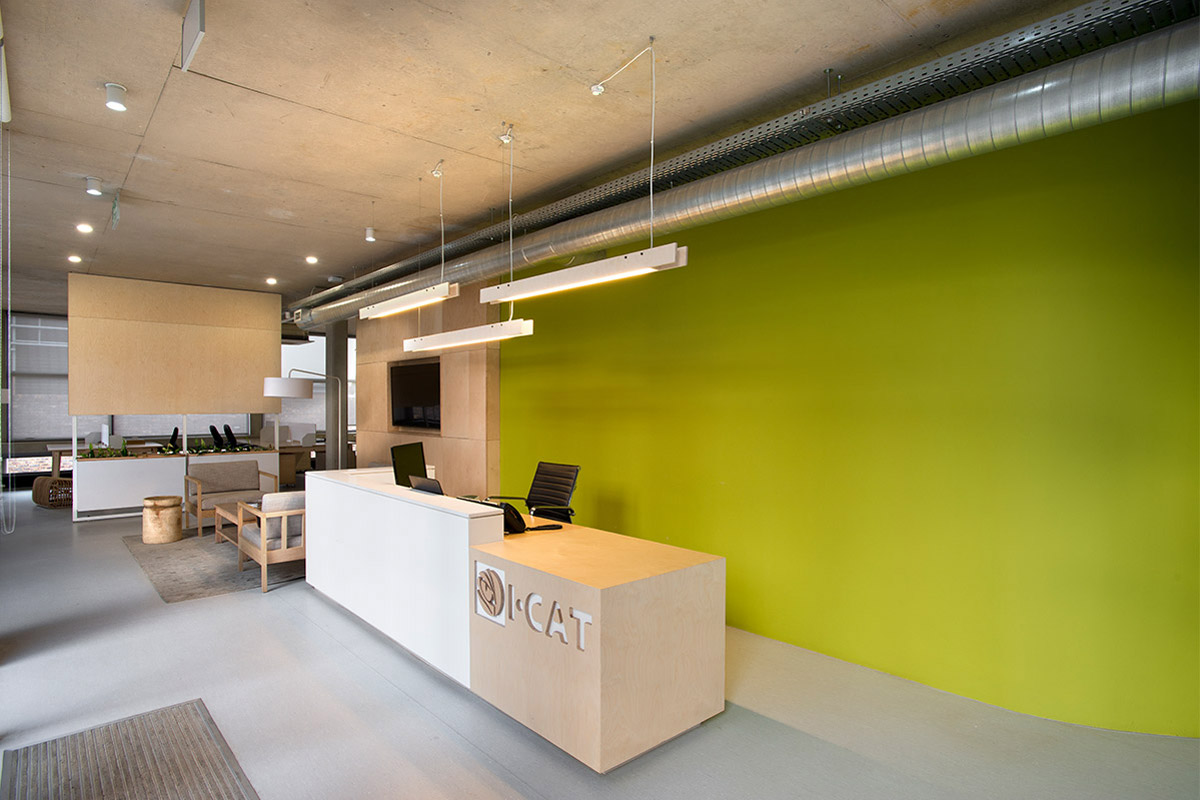 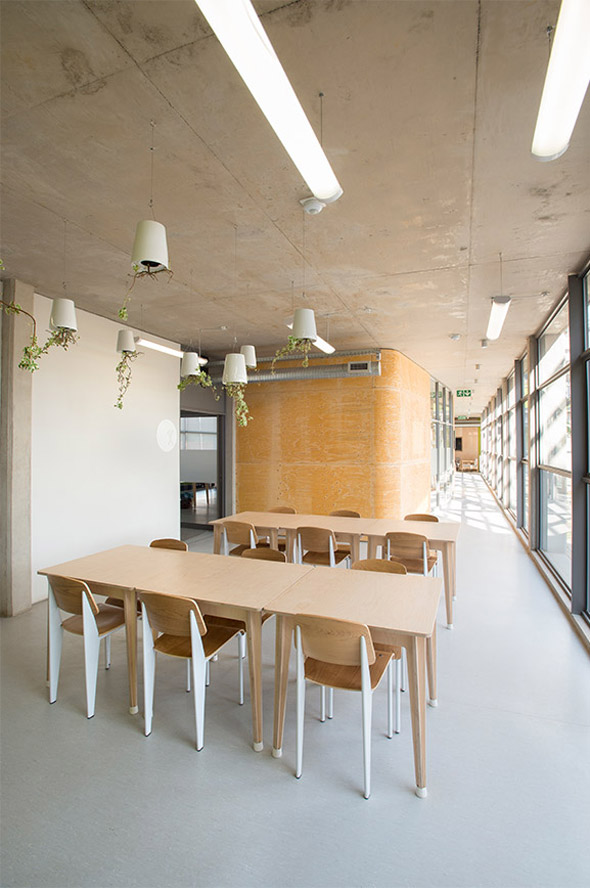 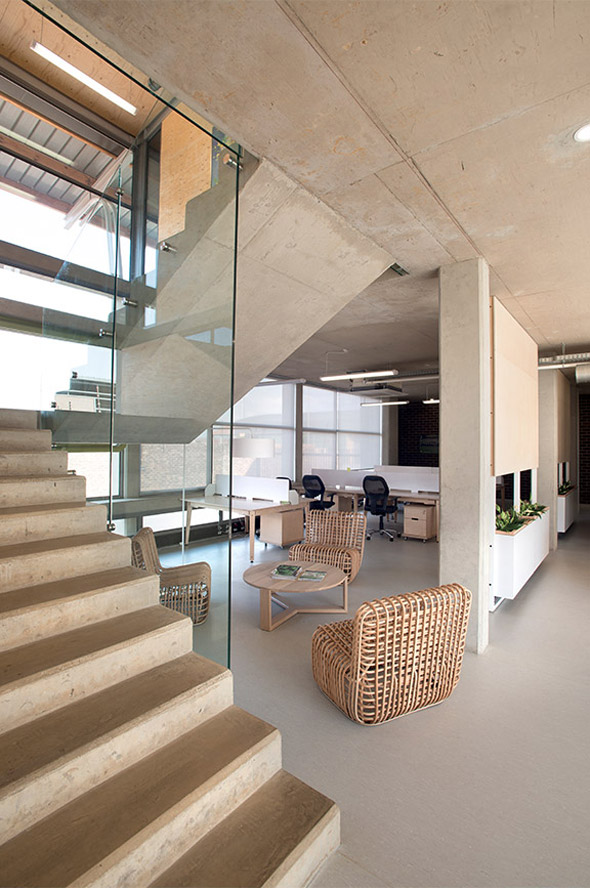 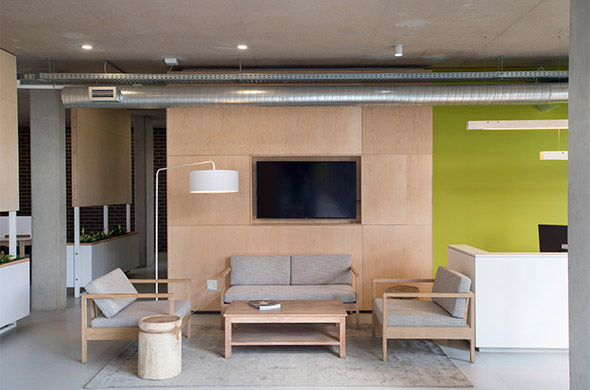 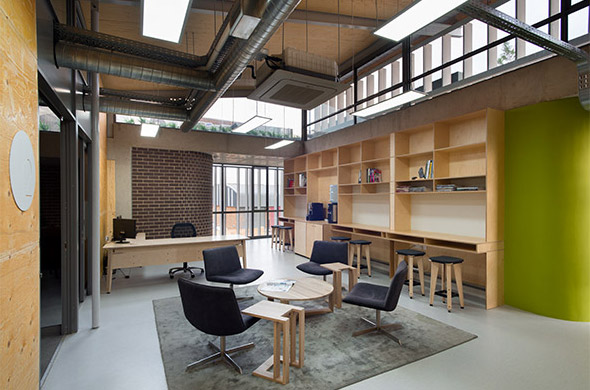